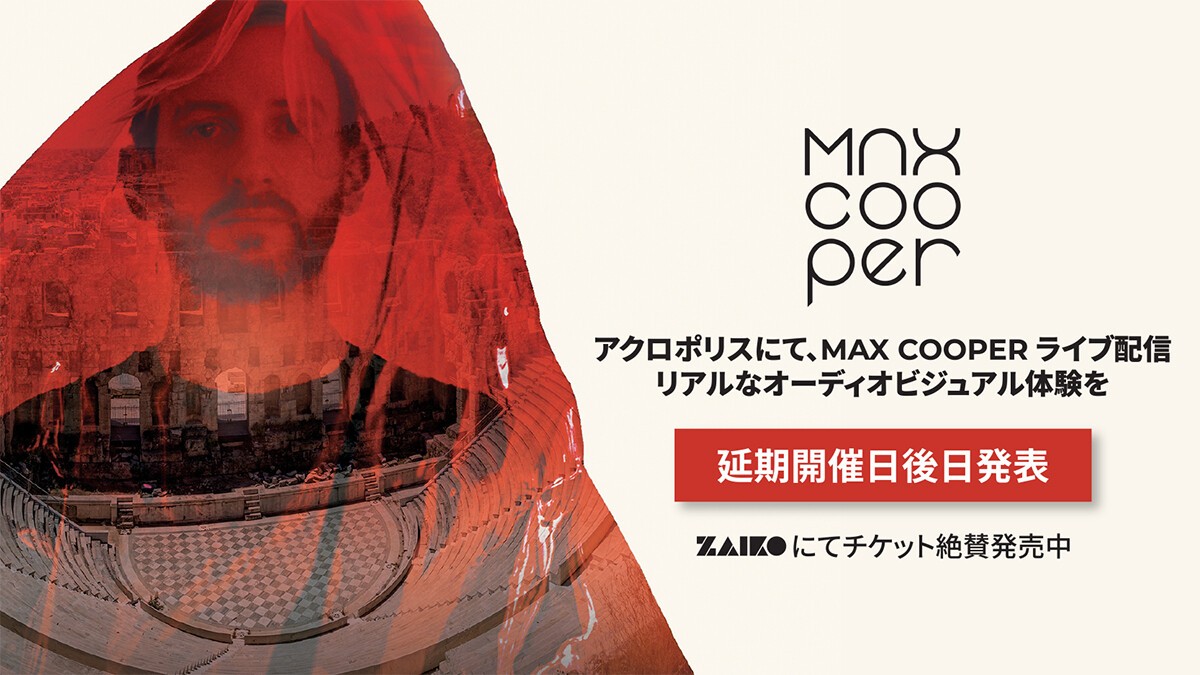 Max Cooper will take to the stage of historical epicentre of modern culture, The Acropolis - the first electronic artist to ever perform there - a live audio-visual show, equipped with multiple projectors and canvases to create a unique fusion of electronic ambient, post-classical and techno music, inspired by scientific enquiry and artistic expression.

His set, along with his journey and creative process, is going to be released across the World. NEW DATE COMING SOON!

30 days archive tickets give unlimited 30-day access to the Live Online Concert, as well as bonus features including a mini documentary, exclusive conversations and more.

As the first electronic musician to perform at the historic site, built in 161 AD on the site regarded as the birthplace of modern thought yielding ideas that have inspired much of Cooper’s work, his hypnotic optics will be projected on the walls of the ancient Odeon of Herodes Atticus as part of the Athens Epidaurus Festival 2021.

Max Cooper is ready to broadcast to fans globally the “meeting of minds” behind the show, understanding how Max uses art, science, philosophy, maths and technology to bring his experiences to life.

Max Cooper says, “Over the years I have developed my live visuals to show to work with spaces, rather than just, in spaces, so that the architecture and beauty, history of the place becomes as much a part of the show as my music and visual collaborations. I'm aiming to make a spectacle of the theatre, and to complement it with my work as best I can. I look forward to sharing this with fans both in person and digitally.”

Few have been so successful in interrogating and furthering the intersection between electronic music, visual art, technology and science in the past decade as Max Cooper. Working with collaborators and large-scale institutions like the Barbican, Zaha Hadid Architects and Dolby Atmos, Cooper has developed a mixed-media approach to creation. Whether walk-through light installations, ground-breaking use of 4D sound, or club-ready techno releases, Cooper’s output of electronic exploration makes use of available technology while referencing that which came before it, and does so in a human way.

His fourth studio album Yearning for the Infinite was created following a commission from the Barbican to respond to their annual theme of “Life Rewired”, exploring what it means to be human when technology is changing everything. The project encompasses film and web media as well as Cooper’s typically lush and emotive sonics, bringing to life our insatiable desire for more via impactful storytelling, abstract visuals and audio.

Synthesising his interests and presenting it in an accessible way that defies conventional format, Cooper explores concepts of emergence, identity and infinity to create an immersion of sound, vision and concept that can totally remove you from your normal experience of reality and put you somewhere new. At the core, Max Cooper’s mission as a musician, a DJ and an interdisciplinary artist is all about provoking a greater understanding.

We understand you may have questions about this and the show in general. Our Customer Support team is here to help, you can reach us here! https://zaiko.io/support

SORRY, this system is not compatible with your browser. We suggest you use one of the following browsers (in order of recommendation)